Head in to the modern extension of the museum and in to the section called ‘Kingdom of Scots’. Then turn right and walk towards the end of the corridor and here you find the section on Mary Queen of Scots.

Mary Queen of Scots (1542-1567) was the only child of King James V and his wife Marie de Guise. Mary inherited the throne at six days old, as her father died from wounds received at the Battle of Solway Moss.

Aged 5 years-old Mary went to France and brought up in the glittering French catholic court. Betrothed to marry the king’s son, Francis. Mary spent thirteen years of her life at French royal court, returning to Scotland after the death of Francis. This happened shortly after his coronation as King of France in 1559. 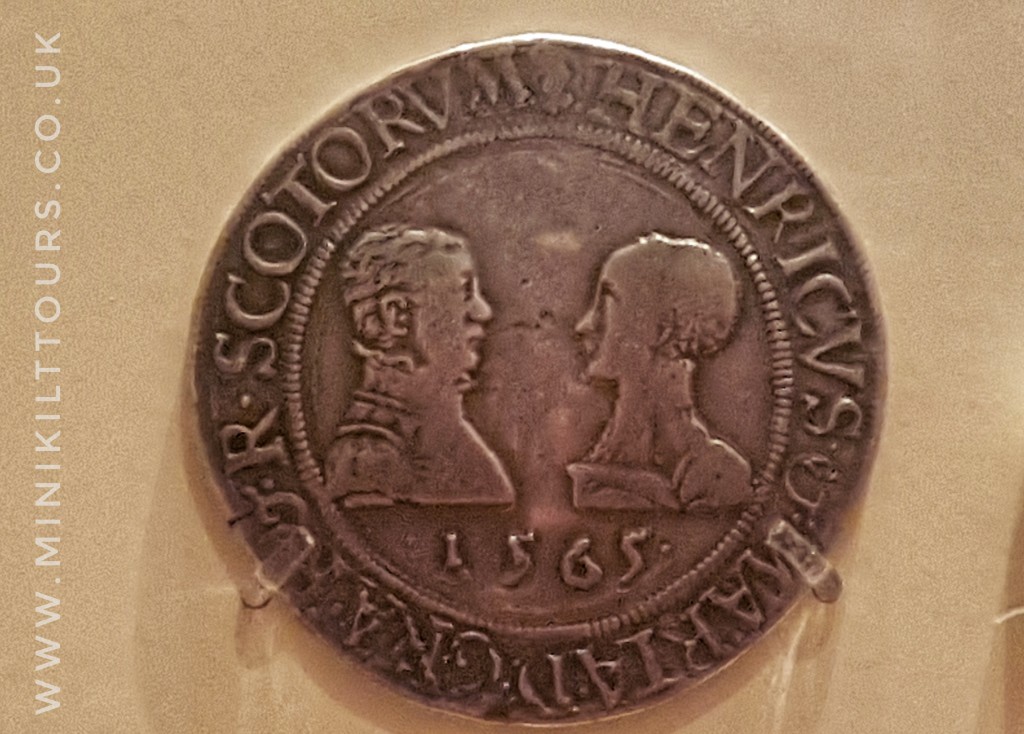 This rare coin dates from 1565 the year of Mary and Henry, Lord Darnley’s marriage. If you read the inscription around the edge of the coin you will read Henry’s name rather than Mary’s. These coins were quickly withdrawn, this makes the coin especially rare.

The image depicts Darnley on the left and Mary on the right with the year of their marriage and coin underneath. The left side was for the monarch, proving Darnley’s ambitions to take the crown for himself. 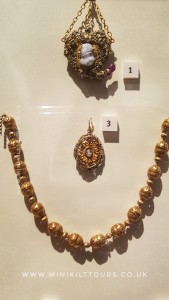 Jewels were essential currency for a 16th-century monarch. They were: a demonstration of wealth and majesty; or sold to raise cash to pay armies or debts. The Penicuik Jewels shown here are exquisite examples of some of the finest jewellery associated with Mary.

The necklace has 14 gold, oval beads with smaller beads in between. The locket has a small painted miniatures of a woman and a man, said to be Mary and her son James.

The Penicuik Jewels are named after the Clerk family from Penicuik who held the jewels as relics of Mary. The family had marriage connections to one of Mary’s servants that she had while in captivity.